Much of the theory for mind mapping lies in the fact that our brain functions differently right hemisphere as opposed to left hemisphere. The left hemisphere has been demonstrated to be responsible for language, numbers, sequence, linearity, logic and analysis. The right hemisphere of the brain on the other hand processes color, images, music, rhythm, daydreaming, imagination dimension and spatial awareness (Gestalt). 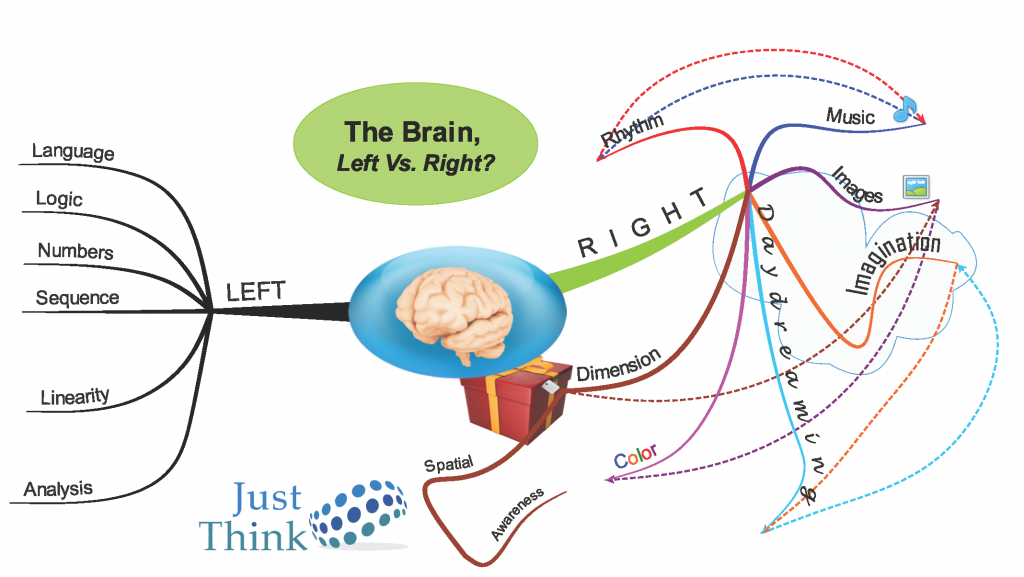 This is not to say that when one is working on a math problem that they are only using the left side of the brain or if they are looking at pictures only the right side of the brain is functioning it’s just that these are the dominant sides when these actions are taking place. Learning best happens when both sides of the brain are engaged but we’ve been conditioned to think in a very left brained sort of way. We start at the top of our page we write nice neat lines that are very orderly and very linear and when we were making those notes, jotted down as a professor or teacher spoke to us, we tended to daydream. This was most likely the right side of our brain screaming for attention trying to get in on the action and we would push those daydreams away because we felt it was very unproductive. Or maybe some of us tended to be doodlers in the margins of our pages, this too, was a very right brained activity. The more research I’ve done and the more I have witnessed the effects of Idea Mapping, I  have found very sound logic to why it is a very effective tool in engaging the whole brain during learning.

Theme by Anders Noren — Up ↑